In October 2008, the Nevin Kelly Gallery hosted the first "zeitgeist" show, titled Under Surveillance. Curated by Ellyn Weiss and Sondra N. Arkin, it presented the responses of twelve artists to what Weiss and Arkin saw as one of the most important elements of the then-prevailing ethos: "the increasingly diminishing zone of personal privacy available to any of us as we are constantly under surveillance by a growing array of government, corporate and media technologies." As a follow up, Weiss and Arkin are asking a group of local artists to reflect upon an uncertain future and respond to the question: "What's important now?" 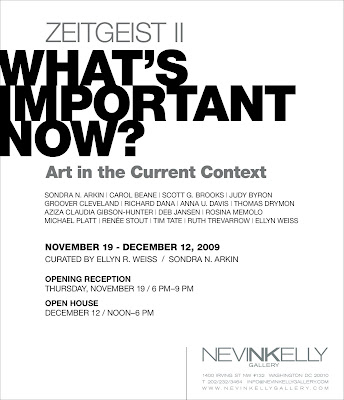 Show runs from November 19 till December 12. Opening Reception to be held on Thursday, November 19 from 6-9pm. You can RSVP on Facebook.

Also, remember that you can still help participating artists Sondra Arkin and Judy Byron complete their collaborative project for the show. Simply go to www.important2you.com and let them know what is important to you at this point in time.