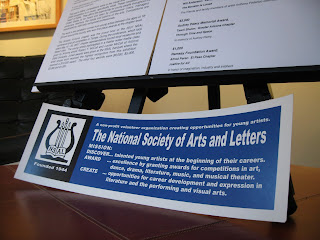 Thank you to all of you who came out last night to celebrate the opening of the National Society of Arts and Letters Water Media on Paper (2007 Finalists) exhibition with us! We are the second to last stop on this national tour. This exhibit is a wonderful opportunity for young artists to explore more imaginative realms, while using a very difficult medium. Local artist Jenny Davis (first prize winner of the NSAL Competition), along with her mother and friend, were also present at the opening.
If you missed the festivities (or simply want to re-live them), visual documentation can be found here. Hope you enjoy the photos and slideshow!
Water Media on Paper will be on view until March 23, 2008.
Posted by Laura Kuah at 5:59 PM No comments: 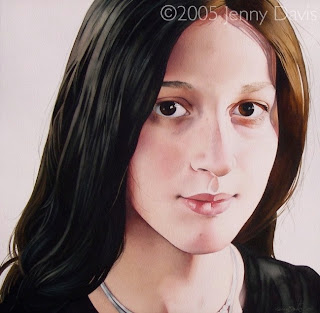 January has come and gone, and February is well under way. With the start of spring right around the corner, it seems appropriate to introduce talented, emerging artists into the local art community. From February 27 thru March 23, Nevin Kelly Gallery will host a traveling exhibition featuring the winners of the National Society of Arts and Letters’ 2007 arts competition. This competition was open to young artists (ages 18-29) who work in water media on paper. Local artist Jenny Davis, a previous NKG exhibitor, won this year’s $10,000 national first prize for her watercolor work entitled "Portrait of Tess” (pictured above). The winning works of the other 18 local chapter competitions who competed for the grand prize will also be on display.

We will host an opening reception at the gallery, 1517 U Street, NW for the National Tour of Works by 2007 NSAL Water Media On Paper competition winners on Thursday, February 28, 2008 from 5:30 to 7:30pm. Please stop by and see this notable exhibition!

Posted by Laura Kuah at 6:32 PM No comments:

She’s done it again! Local artist Sondra Arkin recently brought four new works to the gallery depicting a different style. She was uncertain about the new direction her paintings were headed and wanted to see her work outside the confines of the studio. Arkin’s works were mounted on the gallery’s white walls right before the talk on Saturday afternoon. They were the most talked-about pieces of the day. Sondra may have felt that she “jumped off the cliff”, but she sure landed well. 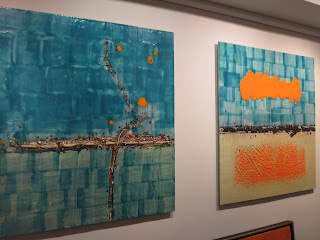 Stylistic development is crucial in the oeuvre of every artist. If Picasso stuck with the academic realism of his figures prior to 1901, the history of art would have never witnessed his defying of tradition via the Blue, Rose and African-influenced Periods, as well as the different stages of Cubism. In the twenty-first century, artists are expected to reinvent their styles over and over again. For many, it is the only way to keep developing artistically. It is hard to do, and even harder to do it successfully.

Two of Arkin’s new works (pictured above), 32’’x32’’ encaustic on dibond paintings, particularly stand out. Her “brick wall” motif both dominates and accents the new compositions, without becoming repetitive, (as, in my view, the paintings in Sean Scully’s Wall of Light series did). These compositions are less structured than before, and indicate the artist’s desire to toss all pre-determined fears aside and simply jump into the unknown. The colors, though still energetic, are slightly muted, as if to reduce the focus on color itself in favor of returning to a focus on the effects of layering – which contain Arkin’s stylistic reference to the overlapping layers of joy, sadness, triumph and tragedy that come to define each of us.

In my opinion, the biggest difference between the old and new Arkin works is in her ability to create movement with the tactile rendering of colors. Rather than having the colors compliment each other side by side, Arkin has produced lines, points and shapes that are suspended in a timeless dance on the picture plane. In her new paintings Mitosis and Waterloo (both 2008), it is the texture that compliment each other; they tell stories and compose melodies. Like the musical paintings of Wassily Kandinsky, Arkin’s new works express power in linear forms and prove that abstraction is not simply the effect of a random process but the result of authenticity and an effort towards the beauty found inwards.

Above all, Sondra Arkin’s continued success in creating abstract art teaches us to observe our surroundings and "see" things we have never seen before or perhaps never looked close enough to see. May these musical pieces continue to add to the many layers of experience that influence our lives.
Posted by Laura Kuah at 7:38 PM No comments: 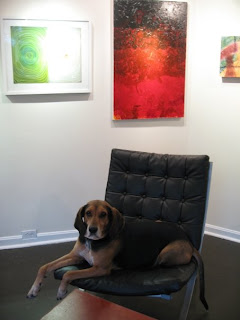 A big, heart-felt thank you to those who came out for the Polish Art Talk and reception supporting “An Ideal Mix-Up” last Saturday. Highlights from the afternoon included the unveiling of Sondra Arkin’s newest pieces (see entry above) and Nevin’s talk on the history of the gallery and the Polish art that inspired it. As indicated on the press release, we will be switching paintings around during the course of the show so please stop by and see us this winter – you’re bound to see something new.

Photos from the 40x26.667 show featuring Mark Parascandola and Stirling Elmendorf:
Posted by Laura Kuah at 7:25 PM No comments: