Local painter, Mary Chiaramonte, will unveil a new series of paintings called “Murmur” at the Nevin Kelly Gallery. The show will run from August 1 through September 2. The gallery will host an opening reception with the artist on Thursday, August 9, from 6 until 8 o ‘clock p.m. Mary participated in the gallery’s “Women’s Work” exhibition earlier this year. 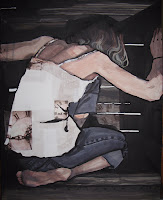 The artist explains the series this way: “I wanted to create a series that worked as a narrative as one progressed around the room. This past February, I learned that I would need to have surgery. The idea terrified me. I saw an immediate image of a theatrical stage with a wooden cutout of a dark cloud moving across the stage from right to left. As it reached the center, a bolt of lightning came down from the cloud, cymbals crashed, and the cloud retreated stage left. The vision made me realize that we all have things we must do but don't want to do. With perseverance, or luck, or grace, or some other way out, we can get past the things that hold us back or keep us down.” “Murmur” shows the struggle to “overcome life’s difficulties and limitations using the image of individual attempts to escape from a box.” Each painting tells a different story. In the final painting, the box is empty: the individual has broken free. The title “Murmur” refers to the faint remnant one hears a moment in time after the original thunderclap.

Gallery friend Lindsay Coates looked so perfect next to the work of Wesley Wheeler and Gretchen Feldman that we had to take a picture! To the left is Wesley Wheeler’s “Blondes 2” and on the right hangs Gretchen Feldman’s mixed media on paper piece. The gallery is featuring a variety of work this summer by local, national, and Polish artists. 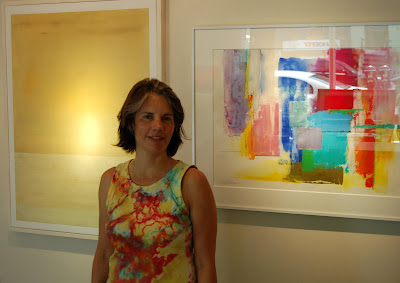 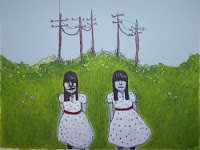 This past Saturday, I attended the opening of a very fun exhibition at the Warehouse Gallery Complex, 1021 7th Street, NW, in Washington. "Art in Heat," curated by Washington artist Scott G. Brooks, showases the work of 18 artists that the show's website describes as "the best of DC's Outsider, Lowbrow and Pop Surrealist Artists." This show is not for everybody. But if your tastes and sense of humor are just a little twisted, you might enjoy it a lot. The show takes a look at the dark side of life, examining (often with great humor) subjects such as loneliness, sexual perversion, death, sadism, fear, and a general sense of the macabre. 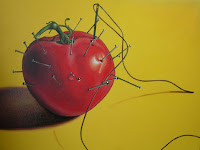 There are very impressive (albeit disturbing) monumental works by Scott G. Brooks, Margaret Dowell and Ben Tolman. Other artists with a strong showings include Laurel Hausler (who participated in our Women's Work exhibition earlier this year), her husband and studio-mate John Lancaster, and newcomer Emily Greene Liddle, whose sadistic treatment of luscious fruits is both funny and oddly unsettling. Take in the associated events, such as live burlesque drawing classes and live music.