Kudos to local men's and women's clothing boutique Caramel for providing much-needed alternative exhibition space to local artists. On Friday evening, I attended the opening reception for the collaborative digital photography exhibition of works by local artists Mark Parascandola and Stirling Elmendorf at Caramel's 1603 U Street, NW location. Mark and Stirling's photographs are ideally suited to each other, like a perfect wine/cheese or wine/chocolate pairing. In their first collaboration, these young photographers look like they've been working together for years. Please show your thanks to Caramel, and your appreciation for local artists, by stopping in to see this show (and the wonderful merchandise Caramel has to offer). You will leave enriched--and better dressed.
Posted by Nevin Kelly at 2:02 PM No comments:

An IDEAL Mix-Up: Event this Saturday!

Please join us THIS Saturday, 26 January 2008 at 4pm for a lecture on Polish art by gallery director Nevin Kelly. Refreshments will follow the talk... 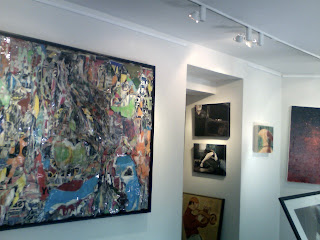 A group exhibition that includes works by the contemporary Polish artists that helped launch the gallery in May 2003 and the many local artists who have joined the gallery along the way. The exhibition celebrates both the gallery's origins and its development as a platform for showcasing emerging trends in local art. Unlike most group shows, which remain static during their entire run, works in this show will be hung and re-hung in stages as works are sold or anchor pieces are moved to share the spotlight. The exhibition will feature works by local artists Sondra Arkin, Joan Belmar, Ellyn Weiss, Mary Chiaramonte and Laurel Hausler and by Polish artists Edward Dwurnik, Darek Pala, Krzysztof Kokoryn, Pawel Król, Lukasz Huculak and Michal Zaborowski.

Have you ever wondered what it’s like to be an art student by day and exhibiting artist by night, while contributing to the history of art? Pawel Król did. This Cracow native is among the newest generation of young artists to appear on the contemporary Polish art scene since the collapse of socialism almost twenty years ago. With his uncommonly mature painting style, it is hard to believe that Król was a full-time painting student (Institute of Art of the Pedagogical Academy, Crakow) at the same time he was having solo exhibitions at galleries and venues in Europe and the United States. Like those of many of his Polish contemporaries, Król’s work capture a certain Polish identity crisis at the onset of the 21st century. 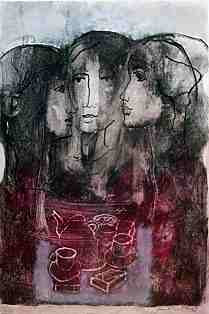 On first glance, each of the artist’s paintings seems to be carefully planned, as if he knew exactly what was going on the canvas. Król explains the process differently:

“The plain sheet of paper or canvas before which I sit creates a blank space; and a blank space develops inside me, in my soul. I become as vulnerable as a child. Neither my knowledge of my trade nor my knowledge of painting techniques can eliminate this sense of vulnerability; it is still just me and the empty space, which must soon be filled with a subject and colors to start the process of coming to be.”

Król's “streams of consciousness” methodology produces results that are refreshingly honest; his works capture the young Pole’s struggle to be Polish in the wider world. His works seem to reflect a journey into the innermost parts of his soul, where he touches on emotions of reluctance, melancholy and elation. His paintings seem to reflect the collision between the new and old Poland, seen from every angle. The subject matters he chooses—women sharing a pot of afternoon tea, a thief stealing the moon, roly-poly men dancing around the Polish flag—reflect a keen sense of humor that counterbalances the angst of his introspective search. Król is perceptive of all that is going on around him, and illustrates it with maturity. 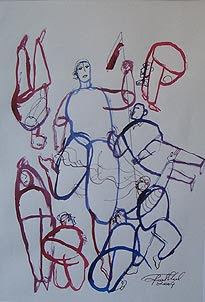 Vive L'Polonia, watercolor on paper
In the works on display at the gallery, Pawel Król’s work is mostly water media on paper—tempera, India ink and watercolor. In paintings such as Tea (2004) and Musical Chairs, the tempera paint helps fill in a background drawn in India ink, using brush strokes that create a scratchboard-like effect. His colors are raw and naturalistic. His process produces highly detailed, precise and sometimes textured artwork.

Król’s childlike vulnerability is shown in pieces such as the watercolor Vive L’Polonia, which uses the medium as a linear technique (note the sketchbook qualities of the figures) to insert a sense of playfulness into what might be considered a more “nationalistic” piece.

Król’s paintings are allegorical. They are capable of broad interpretation. They are “music” to one’s eyes. If one wants to know what it feels like these days to be young and Polish, one could do little better than to look at the paintings of Pawel Król.
Posted by Laura Kuah at 6:23 PM No comments:

This week’s feature focuses on one of the first artists shown at NKG: Polish-born Darek Pala who currently resides in Miami, FL. Pala graduated from the Academy of Fine Arts in Cracow in 1992 and became a well known exhibitor in Warsaw before moving to the U.S. in 1998. He still exhibits frequently there and has exhibited extensively in the United States and elsewhere in Europe. Pala’s paintings are marked by a thick impasto and bold colors that project both energy and mood. 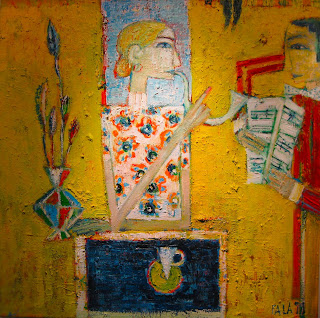 It is a sunny, Saturday morning on the Miami shoreline. A fair-skinned woman, wearing a flowery blouse, sits in front of her caffe con leche at the local breakfast café, smoking what appears to be a pipe. Sunlight radiates throughout the room, creating a sharp contrast of yellow against the light blue sky peeking out of the small window behind the woman. Globs of textured yellow paint are highlighted over a hidden under painting of orange, red, turquoise and indigo blue colors. To the left stands a contemporary accent vase, splashed in red, green, blue and white tones, with decorative stems sprawling out. As is typical in Pala’s paintings, this woman is depicted in profile. She raises her index finger, as if to request something. A tanned accordion player wearing a red coat and white bowtie stands cropped to the right, serenading her with lively [mariachi] music. Their eyes meet, and a connection is made. This seemingly private moment is brought to life by Pala’s use of yellow to bring out the intensity of the situation.

Darek Pala’s paintings vibrate with the energy of living. His figures, when facing each other, are engaged in constant dialogue. When we take a closer look, we discover the mixtures of their personalities. Pala is also a master of still-life objects such as flowers and fruit. On his canvases of flattened picture planes highlighted with sharp lines, these objects have the tendency to jump out at the viewer. Together, with the texture, they form a timeless and poetic, physical unity.

Like the geometric compositions of Joan Miró, Darek Pala has succeeded in exuding his love for shapes and vibrant colors. His mission statement in life is to trust his intuition and paint the world around him. Pala is not interested in painting only the happy scenes in life, but instead, to evoke feelings of love, fear, laughter, and delight through the eyes of a child.

Pablo Picasso once stated: “Every child is an artist. The problem is how to remain an artist once we grow up.” In my opinion, Darek Pala has excelled in remaining a true artist into his adult years, constantly reminding us to never lose our childish innocence no matter where this journey of life takes us.

Welcome back! I hope your new years have gotten off to a brilliant start. This month, we are going “back to the basics” and I will be blogging about the art that helped launch NKG five years ago – Polish contemporary art.

Krzystof Kokoryn, Duet (2005) 31.5 x 39.5 oil on canvas
A few years ago, Polish artists such as Krzystof Kokoryn (b. 1964) were strangers to the DC art scene, but they quickly attracted attention. An image of Kokoryn’s large painting At the Swimming Pool, appeared on the front cover of DC North’s August 2003 edition, and several other Polish painters were featured in press articles about the gallery. Kokoryn’s intensely colorful paintings are sure to bring life into a dark and dreary day. Their warmth seems to be just the right thing to set your eyes on during these cold, short days of winter.

Kokoryn, a native of Warsaw, graduated from the city’s Academy of Fine Arts in 1992. Since then, he has had numerous solo exhibitions in Poland, the Netherlands and Slovakia. We featured his work in a two-artist exhibition at the Nevin Kelly Gallery called “Opposite Poles” in 2004 (which contrasted the contemporary style of Kokoryn against the classical style of Polish artist Michal Zaborowski). Like many great artists since the Renaissance, Kokoryn paints everyday scenes such as musicians playing a tune, lovers chatting in a cafe or friends gathering around the campfire. Kokoryn’s works reflect his bohemian lifestyle and remain authentic notwithstanding his international success. He’s the kind of guy you might like to call up to grab a few beers with at the local pub and simply chat the night away.

The first thing that strikes me about Kokoryn’s paintings is his ability to successfully incorporate both linear and painterly qualities. Many times, his intuitive outlines of the main subject(s) help draw the spectator’s attention to the specific scene. By doing this, he renders his own vision of the events unfolding around those depicted in the painting. A sense of joie de vivre is expressed in every one of his works, from the man playing the trumpet to the nude sitting on her bed.

Comparable to the long, primitive figural styles of Pablo Picasso and Amedeo Modigliani, Kokoryn illustrates human activity, relationships and emotion to the greatest extent. His paintings are enticing and serve as a reminder for us to live our lives in the moment, truly embracing the joy to live and be alive.

Posted by Laura Kuah at 5:36 PM No comments:

All of us at Nevin Kelly Gallery thank you for your patronage and support. We wish you and yours all the best in 2008.
Posted by Nevin Kelly at 10:36 AM No comments: