Sorry for the pause between entries, as time simply ran out these past two weeks for me to do the weekly blog. As the holiday season and 2007 draw to a close, I wanted to focus your attention on two talented local artists in our gallery. Both photographer Mark Parascondola and mixed media artist Laurel Hausler are featured in this year’s Attainable Art show, going on until December 30th. Please stop by and see the show if you haven’t done so already, and feel free to contact us about our reduced holiday hours.

One of my favorite mediums in art is digital photography, a craft that Mark Parascandola has mastered well. Featured earlier this year in NKG’s “Double Vision” photography show, Parascandola has received wide acclaim in the Washington DC area for his ability to digitally enhance images taken in a traditional manner, transforming them into eye-catching, contemporary works. His portfolio includes works from his travels to Spain, South America, Eastern Europe, the American Southwest and of course, Washington, DC. Creative travel photography is not Parascandola’s only forte, as he also works as an epidemiologist for the federal government, and has published numerous articles on public health policy. Talk about the ability to moonlight well! 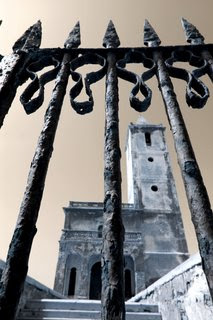 As we know, there is a persistent debate about whether photography should be regarded as a legitimate art form (as much of the important work is done by a machine). Many people question what makes photography art? My best answer would be that the image (think of it as a painting) must possess some sort of aesthetic quality in order for it to be beautiful. What is it about a particular image that grabs your attention more than its counterparts? Is it the use of color? Texture? Subject matter? What gives the photo its mood, and how does it make you feel?

Despite the fact that photography is often synonymous with truth (“the camera never lies”), Parascandola’s digitally altered images seem to deliver a greater truth than what is deemed “reality.” With digital cameras rapidly replacing old-fashioned film cameras, it seems that anybody can manipulate a photograph and call it a work of art. But, what makes Parascandola stand out from the average Joe on the street with the same camera? Composition and quality. The saturated, background colors of Parascandola’s photos help balance out the sharp contrast in the foreground. (see Iglesia Salinas Gate, pigment print, 2007). His choice of subject matter, from the rustic desert churches of Almeria, Spain to the typography found on signs in Washington DC (see Lincoln Theatre, pigment print, 2007), seeks to capture the essence of the moment and make a lasting impression. Like many other great artists, Parascandola sees beauty in the mundane, reinvents truth and invites his viewers to do likewise. 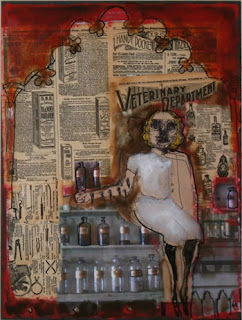 Local mixed-media artist Laurel Hausler is no stranger to the DC art scene. With multiple appearances in venues such as the DC Fringe Festival and Arlington Arts Center, as well as features in the Examiner and the DCist, this young, self-taught artist has taken the nation’s capital by storm. Her eclectic yet symbolic subject matter, sometimes compared to that of Frida Kahlo and Joseph Cornell, is a redeeming breath of fresh air in a [conservative], Washington DC art scene that pushes its limits by favoring representational figures and post-war abstraction. Each piece Hausler creates is like a scene out of a theatrical production.

Heavily influenced by the limits imposed in Catholic school and a general love of history, Hausler has developed her signature style by combining collage, found objects, drawing and painting. Many of her pieces move me, but the strongest of her standout declarations is perhaps the 15x14’’ piece entitled Apothecary (Leeches). This shadowbox composition depicts a scrawly, outlined drawing of a woman perched on the counter of an old pharmacy, surrounded by a background covered with pharmaceutical ads and apothecary bottles. The dominant color is a dark, crimson red curtain covering the screen, as well as white (for the dress) and blonde (for the woman’s hair) painted over plexi-glass. A tone of melancholy perpetuates the scene, which helps us recognize the painful truth of this woman’s life. Standing before this piece, one cannot help but feel stirred inside, knowing that we ought to suffer alongside this woman, feeling her anguish and eventually helping her break free.

Like many of the artists NKG represents, Laurel Hauler pours her innermost secrets into innocent-looking tableaux in order to better understand the frightening unknowns in life. No matter what she creates, Hausler always has the ability to pull her viewers into a world of brutal reality – realizing that life is far from perfect, but that confronting the ghosts from one’s past is the first step to liberation and comprehension.

A great quote to sum up the emotions evoked by both Parascandola’s and Hausler’s works is the following, by English art critic Clive Bell in his essay, Art:

“There must be some one quality without which a work of art cannot exist; possessing which, in the least degree, no work is altogether worthless. What is this quality? What quality is shared by all objects that provoke our aesthetic emotions? What quality is common to Sta. Sophia and the windows at Chartres, Mexican sculpture, a Persian bowl, Chinese carpets, Giotto's frescoes at Padua, and the masterpieces of Poussin, Piero della Francesca, and Cezanne? Only one answer seems possible - significant form. In each, lines and colors combined in a particular way, certain forms and relations of forms, stir our aesthetic emotions.”

Happy holidays from all of us at NKG! See you all next year!
Posted by Laura Kuah at 6:06 PM