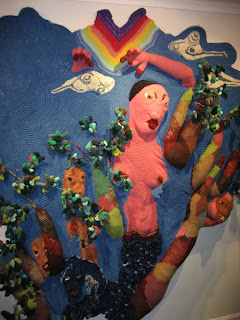 In today's New York Times Arts section Martha Schwendener reviews the show "Radical Lace and Subversive Knitting," currently up at the Museum of Art and Design in New York. The exhibition sounds interesting, but according to the review too few of the works in the show are actually made from yarn or lace, but rather many are constructed of other materials - metal, porcelain slip, etc. - and made to look like knitting or lace or they are conceptual works about crafting documented by photographs. Whether actual lace and knitting or not, the show certainly sounds like it's worth a visit. If New York City is too far to travel to check out yarn's subversive powers (and even if it's not), we've got some pretty controversial crochet work up in the gallery right now that's been attracting a lot of attention. Above is the short documentary directed by Brandon Bloch that we premiered at the gallery last Saturday about the controversy caused by Ming Yi Sung Zaleski's crocheted sculpture. Her work will be up in the gallery through next week.

There's also a great short piece by Melena Ryzik accompanying the review about how young people are increasingly seeing crafting as a rebellion of sorts against our overwhelmingly consumer culture. Ming's work does seem to be a rebellion of sorts. Not for her inclusion of genitalia, which in other artistic media would be pretty standard, but for her elevation of crochet to a fine art medium. We all own crocheted afghans or hats or scarves, but few of us have crocheted works crafted by a classically trained sculptor. Ming explained to me as we were hanging the show last Thursday that crocheting human and animal forms differs greatly from sculpting them out of clay since when you sculpt a body you build it from the inside out, with bones and muscles covered with skin; when you crochet a body you're starting with the skin, so you need to be able to predict what the body will look like when stuffed.